The typewriter is a thing of beauty what’s with everything that moves – as I am too lazy to make my own video, I am linking an unboxing video that shows its moveable parts. As well as the „DING!“ at the end which tbh made me squee the most /ahem Size wise I say it does work for 1/4 scale as typewriters are damn huge things. I adore the fact that you can open it up like a real one! I got a cheap one lacking some tubes off eBay to test the size – I think it fits / looks better with / for SDs as seen below: Though I think it could work as a background accessory in a bigger diorama as long as you do not have the doll too close to it.

There are already some basic shots in this entry though I am including some new ones, mainly the biggest issue – the seat. As an AG doll can’t bed her knees, sitting means the legs splay outward as they get moved into a ’sitting position‘. Therefore chairs don’t require much height which is an issue when using the seat for BJDs. Outstretched legs work best, though that means you might need to balance the doll on the piano or it slips and falls. The Chicline is closer to a sitting position than my Dollshe Fashion guy was, he really sat super awkwardly when the pic below was shot: 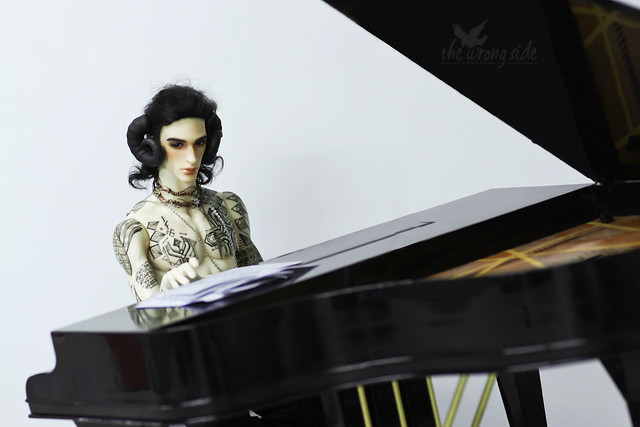 It technically has a black rod to prop it open which wasn’t included when I bought mine – in the picture above I had a Blythe stand holding it open and shooped it out. Need to get a replacement rod. 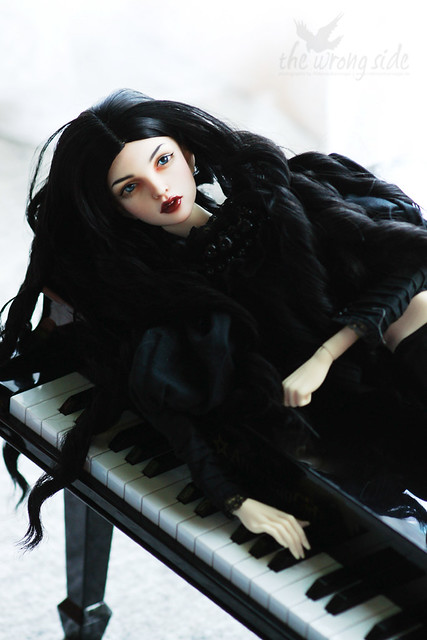 Another issue is the plastic itself, the first time opening the lid, the plastic nubs snapped. Which according to the reviews on the piano on the AG site isn’t uncommon apparently.

Overall I think the price tag of $ 150 on the AG site is overpriced, the introduction price of $ 80 was much more reasonable. I got mine for $ 50 + shipping and for that the thing was an amazing investment and is an epic prop. As you can see mine has the cone spray-painted bronze. Cranberry my ass, that thing was an eyesoring pink it had to go!

It is also imo way too big for MSD to portray a table phonograph – I just pretend mine’s a huge contraption that belongs on the floor. Even the included vinyl is huge XD Though to be fair, AG dolls have shovel hands so it prolly fits them perfectly.

One of the big downside of AG stuff is the fact that the prices on the secondhand market are fucking crazy. Hell, even for items still avaiable in the store the eBay mark-up prices make me balk. As a non-American the AG store is out ( as Aur corrected me in the comments, they do ship worldwide but you need to call the store) and I am therefor confined to eBay. You can get good deals, it just requires regular stalking and callous haggling. I also learned to appreciate eBay Global Shipping Program for the bulkier items as their shipping is more reasonable due to a lot of items being shipped together. Like I don’t want to know how much shipping it’d have been for the piano outside of the GSP.

All in all I quite adore my AG items and think they do make fabulous additions for pictures! Do you have AG furniture or have an eye on a specific piece?