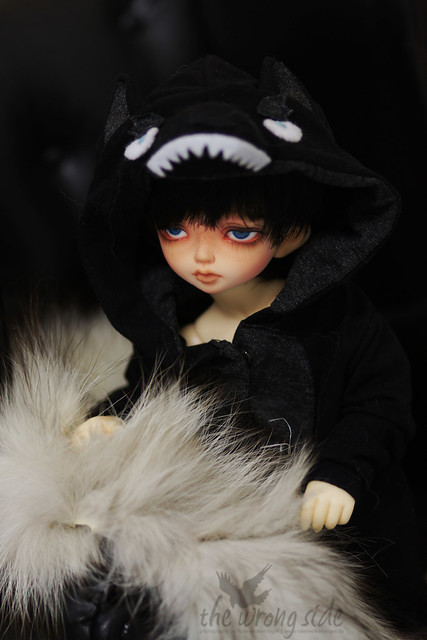 Angrboda is a practical woman. When it becomes clear that she is with child she marches up to her father and announces her intent to carry it to term, to give him the grandchild he’d been nagging her for ages. She also makes it clear that she has no intention of caring for it till it becomes an adult. They strike a bargain – she raises the child until it’s three, for those precarious years where ideas can be easily implanted in a mind that’s not fully formed yet and then she is free to do as she wishes.

She did not expect the child to be a boy, nor did she expect him to be of an unusual serene calm that she never associated with children of any age. But there he is, following her around as soon as he can crawl like a child-sized shadow, his dark blue eyes always watching.

Shortly before his third birthday she gathers ink and paper and drafts a quick letter to his father. She wills herself to not feel any sort of regret as she sends her raven flying, the piece of parchment daggling from his leg.
*
“Have you given the whole thing a single thought beyond ‘stick your dick in it’”!?; Pazuzu had snarled when Wulfric had shown up on her doorstep with a sleeping child in his arms. “Obviously not”, he had growled back, annoyance obvious in his posture: “or I wouldn’t be in this situation now.”
She had huffed and stomped back into the living room to fall dramatically on the couch: “And what now? Do you expect me to raise him or what? You see how that turned out with you and your siblings”. The bitterness in her voice was still fresh. “That’s the only plan I have for fuck’s sake”, he cursed at her and then both shot a glance at the still sleeping child. “Where’s his mother?”, she asked. “Alive and well if that was your concern. A child, however, does hinder her from being captain of a mercenary group as much as it hinders me to be a blood hunter”, he explained, carefully settling down in a nearby chair, child still in his arms.
She had snuck another look at the child, her grandchild for heaven’s sake, then. A boy, no older than three or four, his hair a haphazard mop of black curls. “And who, pray tell, is his mother?” – “Angrboda, captain of the ‘Last Giants’” – “You fucked a giantess!?”
Her raised voice attracted Stephanus who stuck his head through the door, took a look at the picture that unfolded in front of his eyes and vanished again.
“Mother, calm down or you wake him and it took me long enough to calm him last time”, Wulfric sounded very much out of his comfort zone, she noted. Might be because he had been born as her penultimate child and had long been out the house when Lucrezia had been born, leaving no room for him to interact with little children. “As much as I want to help you… can you imagine him living here with me? Now that the whole shebang is well and truly kicking off – I mean, it can’t be healthy for a child to grow up in an environment that will soon be primarily focused on war. As unbelievable as it sounds, I don’t actually want to raise a psychopath!”
Stephanus took that point in the conversation to come back, this time stepping fully into the room, Khaled in tow. Pazuzu looks up at her father, a questioning look in her face before she shrugs her shoulders and tells him: “That’s on your head”. She then turns back to Wulfric: “Hand him over to Khaled, big boss has decided we’re keeping him and Khaled volunteered to make sure he ends up as a remotely normal person.”
*
Before Wulfric had went to this mother with the child there had been the unforgettable moment of utter panic when he had stood in the pouring rain, a crying child in his arms and the certain knowledge that, as much as he wished for the kid to grow up in a ‘normal’ family, it was nothing he could provide. And then the traitorous thought that despite this knowledge he was not ready to fully surrender this part of him, at least not to some faceless organization. Which had only left him with the option to turn to his mother – first to get them out of the godforsaken rain and second to secure the child’s life for the years to come.
*
Theodore does not cry. That is the first thing they realize when the child wakes up from its slumber in Khaled’s arms and looks around with his huge blue eyes. He does not cry when the fact that Wulfric left registers and he does not cry when Pazuzu tries to explain in small words why he had to leave them here and why he will probably won’t see him for quite some time.
They chalk it up to some kind of shock, nothing unlikely for a child who ended up on the other side of the world in the mere span of forty-eight hours.

When it becomes clear that he won’t cry no matter what happens to him there is some concern but ultimately there is nothing they can do. Apart from maybe some of the more unsavory ideas Pazuzu comes up with but Stephanus puts a stop to anything that involves too much bloodshed and slaughter and so Theodore stays as he is. Never crying.

Theodore is Pazuzu’s first grandchildren and prolly the one I adore the most of that particular group – he was raised by Khaled because both his parents are sort of mercenaries and not really that interested in children… and Pazuzu is absolutely not the best choice to raise one again in everyone’s opinion (exhibit A to I: her children).

Theodore is ¼ shapeshifter* due to his father’s heritage but has a greater control over this aspect as in contrary to Wulfric he just accepts his spirit animal as part of himself. In case it wasn’t obvious, his spirit animal is a wolf… and yes, Pazuzu more or less had him walking around in wolf shaped onesies for the better part of his childhood cause “He can take the shape of a wolf, it is /hilarious/!”.

*A word on shapeshifters: that’s a particular skill that gives one the ability to shift into an animal of their choosing, most of the time their spirit animal. The transformation can be full or partial depending on what is needed. The most common spirit animals are wolf and large birds of prey.

One thought on “Theodore”