Because I adored the Birthday Post the Mouse made for her Jun, I figured it’d be nice to do it for Rhys too, because the guy turned fucking seven this year. SEVEN. Jesus, he is old, I am old, we are all old.

Rhys was my second doll whom I ordered whil I was still waiting on my first at the end of 2009 as Angelheim popped up as new company and had some sort of promo going on where you got the fullset of all their guys with both outfits (school uniform and fantasy outfit) as well as the extra parts with blushing and a face-up for cheap. Also he had hooves!

He arrived on the 20th February 2010 and promptly proceeded to switch wigs with my first doll… to be fair, he was able to rock the EXPLODED wig the Dollzone Lola fullset came with.

Awww his hoofsies! I think I sold them pretty soon to fund other purchases though. Thus was the life of a poor student.

The first pic I was proud off, oh god. See me in my corner crying of laughter.

Don’t ask me what I was going for, I honestly don’t know it.

First time changing eye positions! Shifty eyes he has going on, he prolly knew what I had in store for him. Oh and that was already with his new face-up by pepper as I had discovered the wonders of custom face-ups!

Awww lookies, I actually did save his official pictures by the artist! I adore the fawn spots to death!

That was the scary few months where he was pretty close to become a blue-haired crossdresser guy.

But I got a grip on myself and went more towards faun again. We can also tell that 2010 was the year Rhys got an amounted of pictures taken of himself that should never be repeated as I very soon realised as my taste in dolls developed that Rhys… was a mold I’d have never bought in different circumstances which soured my ‚relationship‘ with him considerably. He only made it through the years by my Mom being fiercely protective of him. 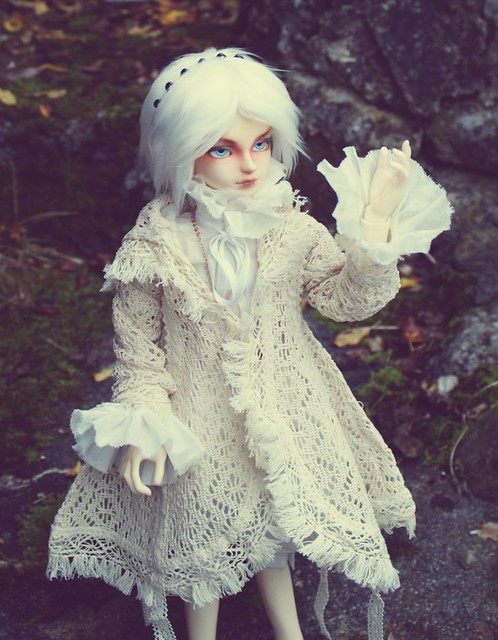 Later in 2011 I went kinda mori-ish with him. And then Ara offered to try something with him and sanded his super pointy nose to something more cute and normal – which also meant a new face-up. So off to HiMiMo / Hitomifrens he went.

Face-up picture from the artist where I tried out how he’d look with turquoise hair. 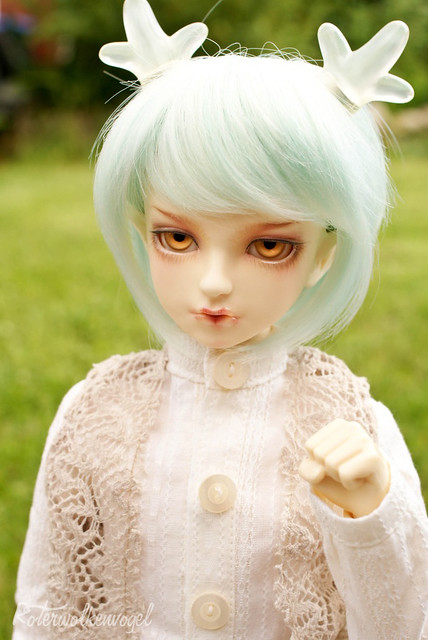 That was 2012 and he still had that more schtick going on. 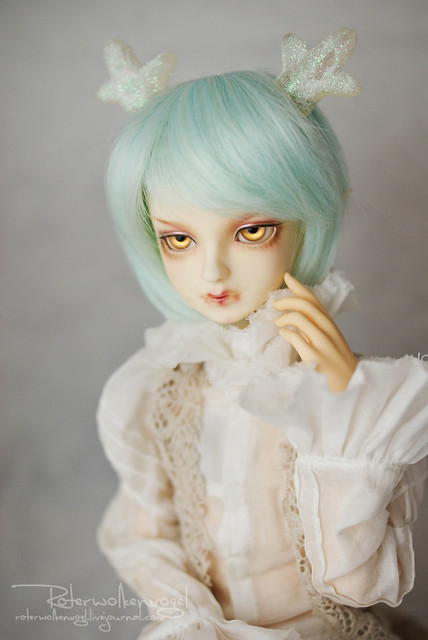 In December of that year I tried to switch out the Angelheim body with the then new curvy Dollzone boy body. Sadly it turned out I should have gone with NS-P instead of NS-Y so that body got sold off again. Also glittery horns! The Dollzone body was tall tho. 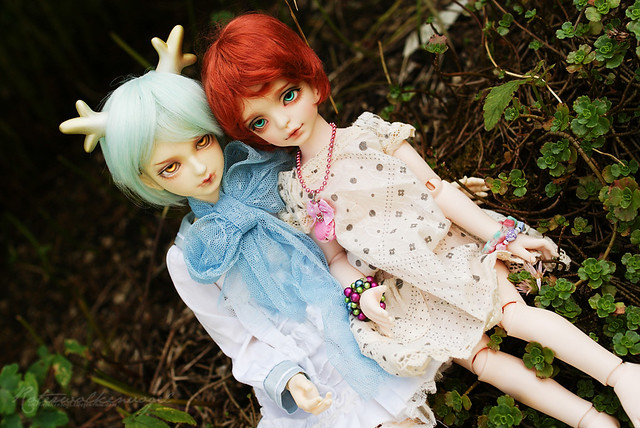 We do not talk about 2013 tho (shit, he did became a turquoise-haired crossdresser guy for a while there, welp). Apart from the fact that Rhys got a Limhwa Limho Mono body which was very nice <3 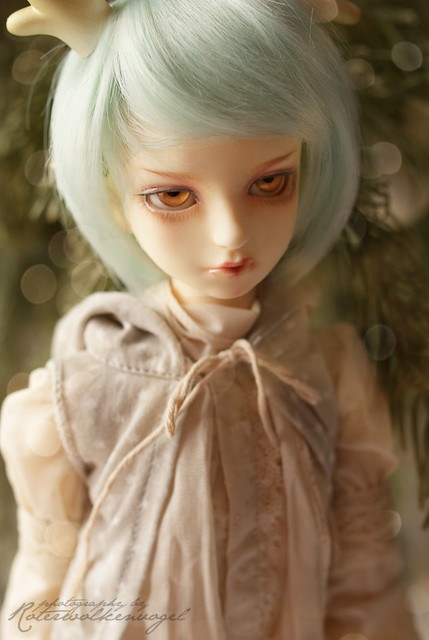 2014 started off with Rhys still in some sort of confused mori / pretty boy and I was just so… annoyed with him? That was when I was going through the big upheaval of my collection where I sold like 90% to start over again. 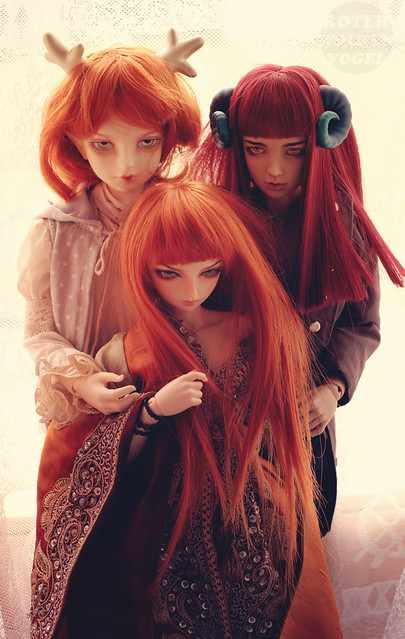 Which meant that in March 2014 I owned like three full dolls and yet Rhys I still wasn’t able to sell lol. I have to admit I got no clue what possessed me to a LeekeWorld wig from him nor why I went with Goldenrod instead of idk, pink or lilac but I a so glad I did cause it changed him into a more… mature person. 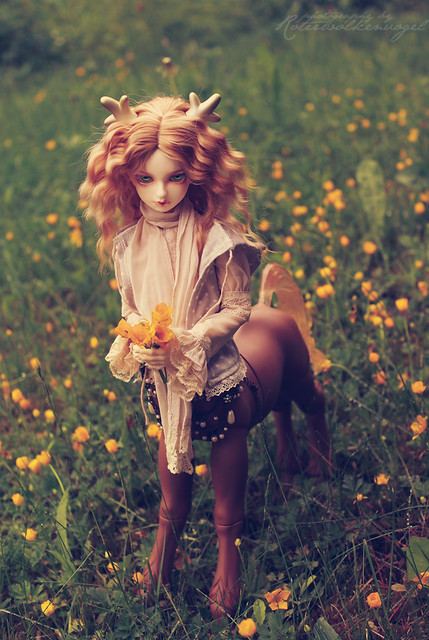 And then I finally had enough of my Mom whining about the loss of his hooves and uh, got him a LUTS centaur body. I can say without hyperbole that this was the first time I loved this guy again. 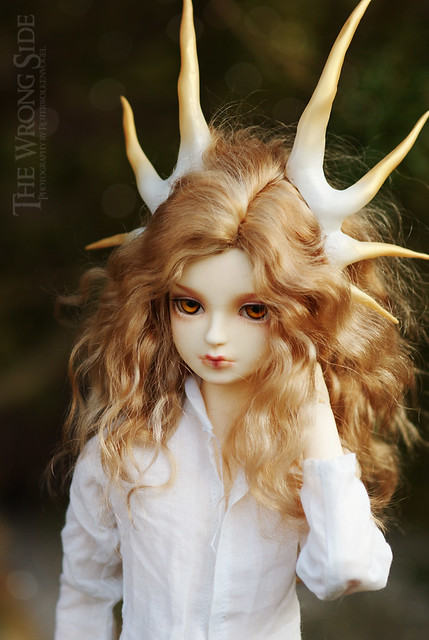 2015 brought the chance he needed tho, he got an eclipse21 wig and DollBakery urethanes as well as a way bigger set of horns and holy moly yes. And Ara blushed his horsie ass. 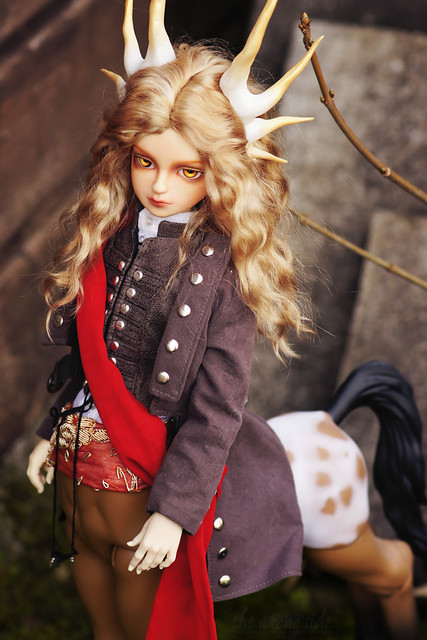 The nature of Rhys is still that he only gets one or two pictures a year – this was from 2016 when his Nezumitoo outfit arrived which made him as complete as he could have never hoped to be. He also got a new face-up which uh, will get repainted again this year cause the artist kinda went MIA for months which considerably soured me towards it. 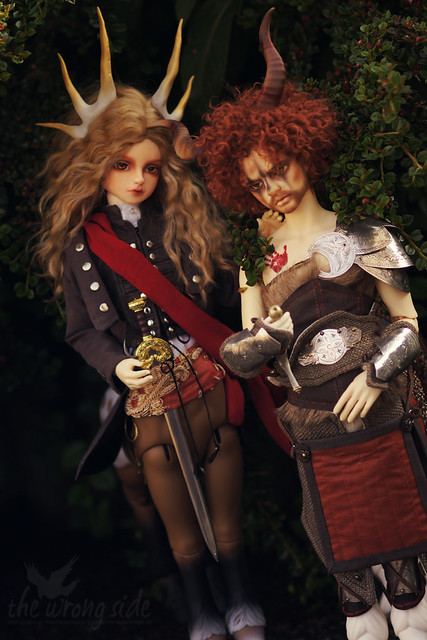 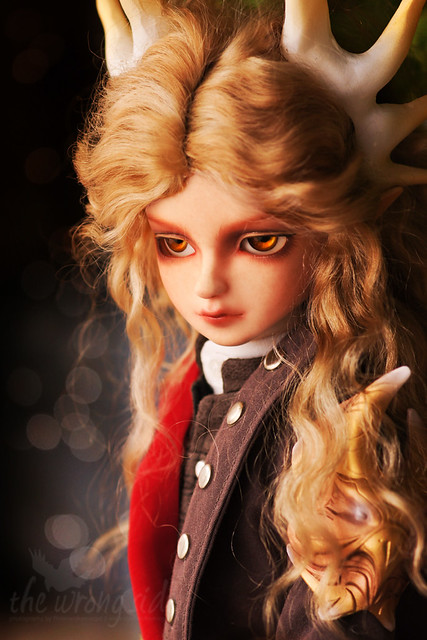 Status Quo is as usual, which means that Rhys got exactly one picture so far and is at large chilling in his cabinet, overlooking my room.