I admit I lied about the Monty Python part but there is my holy grail – Volks YoMidi Williams! Thank you Volks for allowing us non-SD collectors a taste of the Williams craze.

I kid, I think that doll was my most frustrating one to acquire, even though I only really tried starting mid last year – and then had to pass on two generous offers to pick up one at the Volks Cruise 2017, briefly got my hopes up when another friend said she might know someone who has to pass up on her LA Dollpa one (that didn’t happen) and then ultimately got offered one from the Volks Cruise from one of the two people who already offered a pick-up service. Afaik, that crazy rollercoaster ride of emotions is part of the Williams package.

To be fair, when I decided to finally get one last year he was supposed to replace my Iplehouse Ryan but no one bit so the Ryan stayed and I never paid real attention to whom he could be until that brief surge of homg LA Dollpa Williams that made me think hey, he could be the adult version of one of Pazuzu’s babies! (I swore I would not fall down that rabbit hole cause I am weak)
But then… then I thought WHAT IF I take him to replace a precious character to finally fit in head size wise with his husband and daughter? Because I easily get obsessed over menial things like this, I think I drove my poor best friend crazy to the point where she agreed to my only partially joking offer to paint a Williams – partially also cause she pointed out that with my track record with this guy he’d prolly end up catching fire at the Russian border on his way to an artist. I can’t deny that these words are probably true. Damn Williamses.

ANYWAY, blabbering aside, I stalked the tracking like a mad woman on Friday and when that dreaded „your package will be forwarded to your local customs“ update came I very nearly threw the phone across the room cause technically you can’t pick up any package without the letter from the post telling you it’s at customs (andd it only comes at least a day after it got into customs). Technically.
Fortunately after seven years my customs people know me so I figured I just drive up there and make puppy eyes. Worked out, even if I had to wait for the post to actually drop him off first (but hey I got coffee and didn’t even have to say it was a doll – it was all „oh hey Ms Z, how much was the doll this time?“). Bless these guys. HOMG it even included the Volks shipper, I nearly died cause ahhhhhhh (my only other Volks doll is a Volks Ian and that one did not came in a Volks shipper lol) I died, just bury me with this precious baby.

I admit, after that it is all a bit of a blurr with lots of disassembling, hysterical cackling („WILLIAMSSSSSSS“) and other stuff BUT… 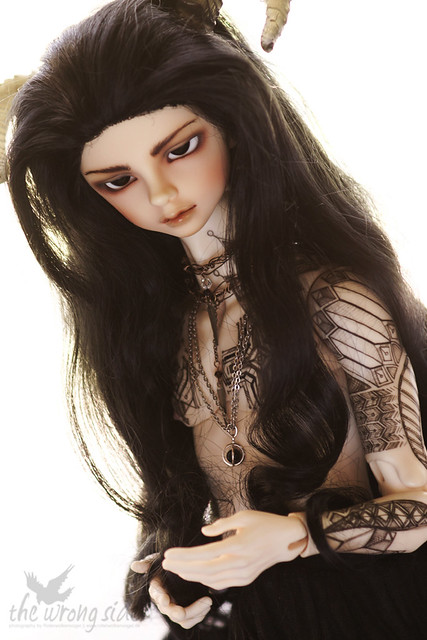 He really looks amazing, but uh… won’t save him from a new faceup and a mod job. And bigger horns maybe.