[Fair warning, this entry includes more shitty phone pics than you can shake a stick at because I did not had my good cam for most of it]

Munich to Helsinki was some dinky little thing where the only „entertainment“ was a lady two rows in front of my fainting onto the floor which evolved into some huge production including all the crew, an oxygene mask and a doctor who was a passenger on the flight as well.
The lady was fine afterall but there wre a few minutes where I though ‚welp, that’s it, we’ll make an emergency landing soon“.
Otherwise it was packed full of people which made the fact that out flight from Helsinki to Beijing was in an only sparsely packed A350 all the more eerie.

Helsinki Airport is btw a nice one as far as airports go, even if I only saw a bit of it. Food was tasty too (if pricey but eh). 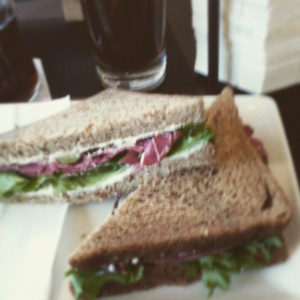 It even had free WiFi which was the reason I randomly met a lovely German lady loving in Beijing and flying home whim I helped to get Internet access on her Mac and who in turn gave me tips for sightseeing in Beijing.

But hot damn, the thing was full of neat shit! Flight camera, full spectrum of entertainment including some new films (Spectre, The Martian). 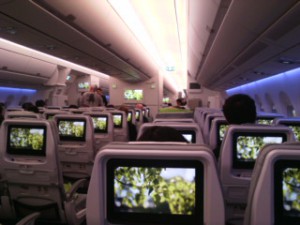 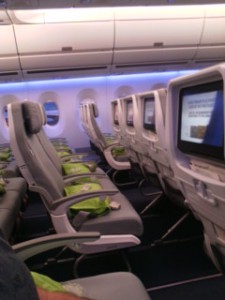 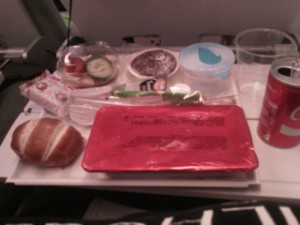 For dinner it was this tray of tasty food – the sealed pack is schicken with black bean sauce, a super tasty noodle salad, crackers, bread, butter and cheese, a brownie and hilariously water packed in a round package.

And then I spent the time till bed times watching Ice Age and being amused that they doled out three sorts of alcohol for free because I kinda assumed you’d need to pay for that, at least in Economy. But apparently that was ‚complementary‘.

The whole underbooked fact came in handy at bed time though cause everyone just claimed a full three seat row for themselve and went to sleep. I even managed to get in two hours of proper sleep and maybe one and a half hours of dozing so it was nice. Especially with a fucking crying child on board. oh and the fact that we were in a tin can a good 12.000 meters above the ground. On my first international trip. So I say I did good. 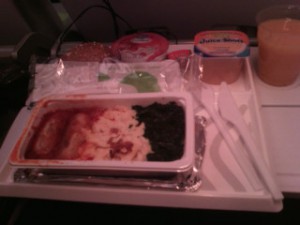 Breakfast started with warm napkins handed with chopsticks – breakfast itself was turkey sausage, scrambled eggs and vegetables (really, it was spinach only imo). Not overly tasty but it filled up.

We reached Beijing at 7:25am local time and because this is a business trip, we went straight to the business meeting… where I proceeded to mainline coffee, mandarines, bananas, tomatoes and cookies in a valiant effort to not fall head first on the table and sleep forever. Oh and the promise of hot pot for lunch, that also kept me kinda awake while I listened to half of the people in the meeting blabber in Chinese and the rest in German which also went mostly over my head cause that is some levels higher than my usual stuff. 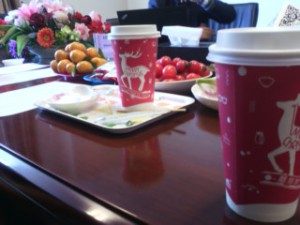 My view during the meeting.

Break came with going out for lunch which was both tasty and hot as hell. I think my gullet might be dead forever.

The people in the compaby are extremely nice! Like we got a driver assigned to us that we are free to use to drive us to sightseeing all around the city on Sunday and Monday!

Atm I am fighting the hotel’s uber-shitty internet (Facebook? Blocked. twitter? Blocked. Instagram? Can’t decide what it is but mostly blocke. flickr? Blocked.). Communism says hi! Hilariously my e-mail works, as does DoA, LJ, tumblr and dollicted so if you need me, use these outlets to contact me.