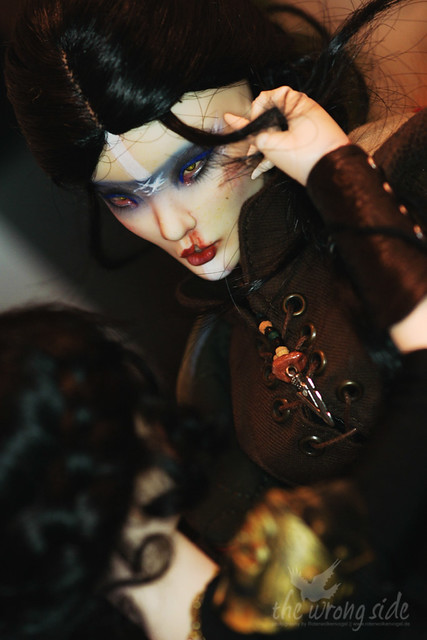 Character Stats
Profession: Headhunter
Element: none
Notes: Angrboda is the daughter of one of the giants‘ many chieftains. Born as the only child to an elderly matriarch she was expected to provide an heir to her lineage as her mother died shortly after her birth, making her ruler alongside her father by the tender age of two. A fate, she did not agree with. Instead she left the tribe to pursue a career as a headhunter.

When her mother had died she had to step up by the rule of the clans as its ruler next to her father. She was but an infant swaddled in blankets on a throne much too big for her and yet her people bowed their heads to her. Matriarchal law had brought them here and they’d adhere to their law of inheritance.

She made an awful ruler. She was aware of that pretty soon but there was no way to get out of her obligations to her people. So she walked away.

This could have been it but you do not leave the tribe behind that easily. So even if she ends up travelling Silmä far and wide, she can always feel her heart longing. Her father writes, of course he does, and his messengers always find her somehow so that she gets to curl up while she tries to decipher his messy scrawls.

She takes up the man hunt and sheds the name her people had given her to choose one that feels more suitable.

Angrboda. The one who brings grief.

She did became a very successful one and met Wulfric due to her line of work, resulting in a brief fling and ultimately a pregnancy. A pregnancy she used to convince her father, as her mother had died in her years away) to barter for her ultimate freedom: she’d raise the child until the age of three and form his mind and then would give him over to his father, continuing her career unobstructed by a child.