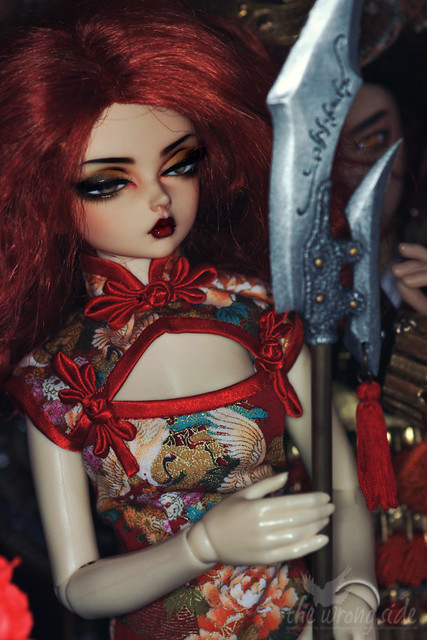 Character Stats
Profession: warrior
Element: Fire
Notes: When the oldest of them had been born their brother already had had his son and was living with his first husband. He did visit occasionally, always bringing gifts for them, but there was no love lost.
Warfare came naturally to them, the lust for battle a second nature – their brother’s getaway just another fleeting, passing moment.

It had been a joke at first, each of them dressing similar, doing their hair in the same fashion, applying make-up in the same style. It had evolved into their trademark.

The last and final step had been Kekona’s suggestion, the second eldest of the sisters being well versed in magic – a spell, found in an ancient tomb, a meeting at midnight under the full moon, blood that flowed freely into the cauldron.

It was a buzz at first, like a bee that flew against a window, again and again and it grew until the buzz was all they could think of. And then it was gone. And in the silence left behind Kabira’s voice spoke.

“We will rise like the sun. And no one will stop our ascent.”

And thus it was, their newfound ability to share each other’s’ thoughts, dreams, knowledge, did make them into a near unstoppable five-woman-army, the only difference to disguise them from each other their weapons of choice.

She and her four sisters are the younger siblings of Khaled who were born years after him. In fact, Kimete, their nephew, was already an adult when Kabira (the oldest) was born.
In contrary to Khaled they are the heirs their father Arundel expected (read: ready to do what he orders instead of questioning why exactly some things are necessary).
They operate based on some sort of hive mind, where each of them knows what the others are doing/feeling/planning which is due to an… interesting spell, Kekona the more magically inclined sister of the group casted on them. Consequently they all morphed into copies of each other, using make-up like war paint to appear as similar as possible, only to be distinguished by their preferred weapon. They also start to refer to themselves as the K5 Unit around the same time and have earned a certain reputation.

They hate Khaled’s guts as he fled the whole shebang and has been branded a traitor by Arundel ever since (as well as a stain on his family’s name and that’s a no go for Mr. Crazypants).
Kabira herself ends up being married to Rajko as the latter lost his husband and his connection to the royal family for services rendered after Khaled fled so someone had to make that up. Though to be fair, Kabira and Rajko are having a way better marriage than Rajko and Khaled.

In the end, the magical hive ends up focused in (and on) Kabira after Khadija got fatally wounded and Kekona decided that, in order to avoid the death of one of them dragging down all of the surviving rest, they should give up mortal life willingly and exist as presence inside Kabira’s mind. Doesn’t help matters in the sanity department.