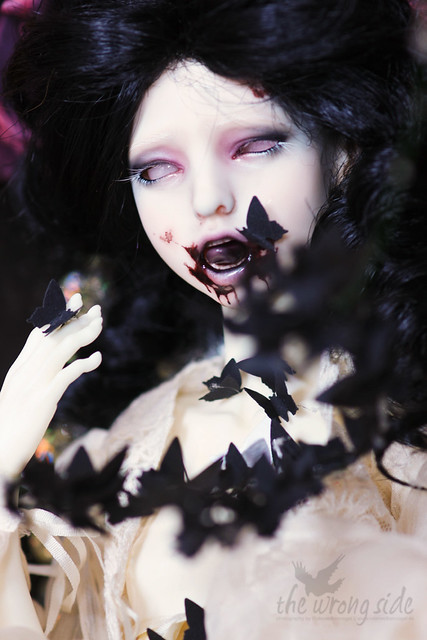 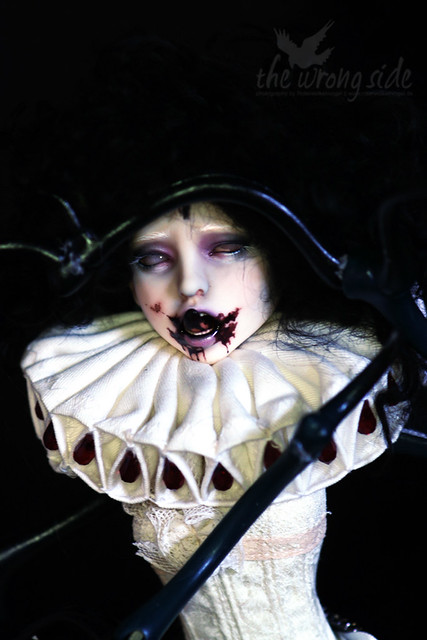 Character Stats
Profession: Goddess of Nightmares
Element: none
Notes: The Council of Gods meanwhile had gained another member – a beautiful young woman, who referred to herself as ‚Grendel‘, and had brought two hideously deformed men with her, Deimos and Desiderius. She had once been the mistress of a rather unknown lord, whose wife had her banished into the deepest and darkest cell in their castle where she had charmed her jailers, afore mentioned Deimos and Desiderius, into freeing her, subsequently fleeing from the castle into the forest. There she had started to brew concoctions of grisly nature that she had then smuggled into the castle to be mixed into the wife’s dinner. The wife soon started to experience nightmares so scary that she awoke screaming every night and would refuse to go to sleep at all, haunting the castle during the quiet night, howling and screaming until no one found any sleep at all. At this point Harbinger had drafted her into the role as Goddess of Nightmares. The role seemed to suit her and she was soon seen sitting cross-legged in the vast hall of marbled white that led up to the hall where the Council met, wearing only a sheer nightdress and a crown of flowers, that she wove anew every day.

Questioned about the relevance of Deimos and Desiderius in her new role as god she’d pet the men’s’ heads like you’d pet a dog and explain sweetly that they were the base of her best nightmares, her inspiration, and thus it would be beneficial to leave them in her care.

Dreams and nightmares are made of fine gossamer, strands so fragile; a breeze could tear them through. And yet powerful enough to weave them into weapons of manipulation. Grendel, Goddess of Nightmares, was the fat spider who sat in the middle of the tangled web where all strands meet. Dressed in a gown that seemed to be made out of the darkest night, she sat and weaved, strand for strand, until the nightmares took shape under her hands.

Always by her side, Desiderius and Deimos, her minions in her castle made of shattered dreams.

Grendel herself is a nightmare, accountable for dreams in general (and more specific: nightmares) and therefore a god.

She can control the dream of every demon and human (i.e. implant specific ideas, manipulate and so on).